on February 20, 2012 by Caroline Frost, Marriage and Family Therapist
Print 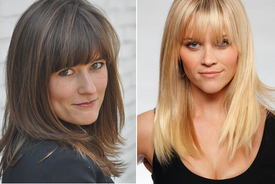 Warning: For the purposes of analysis, the following includes major plot reveals

This Means War is the story of two CIA agents who are competing for the same woman and she has to decide which one she likes best. It starts as a gentlemen’s agreement and turns into ruthless warfare. Tuck (Tom Hardy) is a divorced single dad and hopeless romantic, totally desirable in every way. FDR (Chris Pine) has initials for a name—very presidential and distancing—and he's your classic lady killer who goes through women like underwear and seems to have zero interest in monogamy. When we meet Lauren (Reese Witherspoon) she's portrayed as single and romantically drab. She's successful, she's got a great career, but otherwise there's not a lot of back story. We only see her beefcake ex, who she found in bed with a Pilates instructor, and from him we know that she likes the bad boys. Lauren’s got the option between the Tuck, the safe, basically healthy guy, and FDR, the wounded—they're usually wounded—guy who treats women like meat.

When Tuck and FDR are first setting terms about pursing Lauren, Tuck nobly makes the point that the person who should win isn't just the best man, but the “best man for her.” He seems to care about her—at least, that's clear in his intention, if not the execution. So what's the message when she doesn't pick him? That nice guys always finish last.

I was actually surprised by her choice. I thought it was going to be Tuck—he’s respectful, sentimental, and a loving father, and he doesn’t hurt to look at either. I was definitely rooting for him. A guy like FDR doesn't get magically cured by a woman like Lauren. And she makes her decision between them instinctively, which you shouldn't do. Intuition is important, but it can lead you astray—especially when you already have a history of going for cheaters, which she does.

I think Lauren, like many people, fears simplicity. She’s drawn towards complication and intrigue, because if she had picked the healthy guy, she'd have had to deal with her own issues. But picking the unhealthy guy who's always going to keep her on her toes, who she’ll never completely trust, will keep her wrapped up in his shenanigans. She'll never have to settle in and get introspective.

I was curious about why they make a point of having her ask Chelsea Handler if it's okay for her to date two men at once, like it's obvious that that should be a problem. I don't know if the movie is just trying to point us to this idea that she's prudish or choosy, but last I checked it’s generally acceptable to go on dates with more than one person until there’s an explicit conversation to the contrary. I thought the dates and her feelings for the guys escalated pretty quickly—within a week and a half, there's sex, meeting the family, and even the L-word gets dropped.

If Reese Witherspoon's character had talked it out with me instead of Chelsea Handler, I would have her outline what she's done in the past that has not worked out in her best interests. I’d also want to know where does she find herself inclined to repeat those patterns, and I’d ask her to look at where she finds herself crossing her own boundaries. Like when FDR kept pushing her for a date in front of her job, I'm curious how that made her feel. Did she get a high off his bullishness?

I’d heavily challenge her whole giving herself a week deadline to make a decision between them. She just doesn't have enough information. I would encourage her to just draw it out, see how they roll in different contexts and see how they respond to her setting boundaries. And I think it helps to put things on paper. Intuition is important, but when you've had destructive patterns in the past, just slow it down.

These days millions of people date online, and it’s like going to Starbucks where we have all these specifications and the fantasy is we can get it just right. And the absence of flaws she found in them was deeply suspect. All she could criticize about FDR is that he has “tiny hands.” If you can't come up with a flaw in someone, check yourself because we all have them in spades and clearly you haven't known them long enough.

Lauren tells Chelsea Handler that she wants to pick the guy who makes her a better version of herself. But the way she does it makes no sense to me. Tuck is the one who took her to do brave things: drive a speeding car, swing from a trapeze. There was play in their relationship. It’s not clear to me how FDR brought out the best in her. He's just totally the very common female fantasy: he’s the hot fixer-upper, the challenge, the one who's love is harder to get and if he wants you, then that means you're very special. Versus the available, committed family guy who she describes as “safe.” God forbid he be safe.

The movie does show a safe, sweet, committed, relatively healthy, “boring” relationship between Chelsea Handler and her unsexy husband Bob. I wish the message of the film was more about what was going on between them, which is that relationships aren't perfect, but you pick the person that you like to talk to who keeps you warm at night and accepts you as a human being.

It might be key that she sleeps with FDR first. If we think about hormones, people do get a pretty powerful surge of hormones like oxytocin when they have sex, and that's intended to make us feel euphoric and bonded. But what's interesting is she withdraws a little bit the morning after. I wonder if they movie had her acting all snuggly and happy to eat breakfast with him, would he have kept going? My guess is he would have felt trapped and backed out.

Now she's about to marry a CIA womanizer who doesn't know her and who she completely let off the hook for multiple invasions of privacy. And she doesn't even know the extent of it: they put bugs all over her house, they had a tracker on her car, they have a DVD of the first time she slept with FDR. I guess holding secrets is what he does for a living, but she's never going to know when he's telling the truth—she'll always have suspicions.

I think she should have been more pissed off about being manipulated. The wooing had nothing to do with her and everything to do with their competition with each other. On their dates—especially with FDR—they're presenting a false side of themselves to her. FDR pretends to like dogs, he pretends to like art, and none of that gets corrected. He's inauthentic. It's a relationship predicated on lies—and he has no idea who she is. He collects data, but I didn't hear them exchanging a lot of information. Their dates were distracted, physical, there wasn't a lot of talk.

Ingmar Bergman did a movie called Scenes from a Marriage, and it's an excruciatingly tedious three-hour film about a married couple just hashing out their differences. It's all dialogue and it's right up my alley—it's really cool to see how two different people struggle with their differences and reckon with themselves over the course of a long marriage. Of course, it's made by Ingmar Bergman and not McG—it's not what most people want to see on a Saturday night over a bag of popcorn. I think that we as a culture have an expectation that things be perfect in relationships, and it's very sad because it’s an instant set up for divorce and these disposable marriages. One thing goes wrong and people want to drop the ball. The truth is it's terrifying to be a human being in a relationship with another human being, with all sorts of flaws clashing against each other.

Our leading man is not going to drop his woman habit overnight. Commitment does not come easy to people who have relational trauma like his, and if they do get married, it’s not likely to last. At the very end Lauren says lovingly to FDR, “You're going to make me regret this,” and he says, “For the rest of your life.” Perfect last lines.  Finally, they're both speaking the truth.

Caroline Frost, MFT, is a licensed Marriage Family Therapist and specializes in intimacy disorders like sex and love addiction and relationship dysfunction. She sees individuals and couples in private practice in the Beverly Hills/West Hollywood area. She also specializes in treating creative populations. For a free phone consultation, call 323-839-3707, or email carolinefrost@mac.com. For more info, visit www.carolinefrost.com or follow @LoveWellTherapy on Twitter.