close
OPINION: Perry is a prisoner of his own success 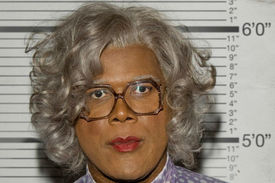 Since 2005, Tyler Perry has released 13 films under his successfully established brand name. For anyone counting, that's an average of one new Tyler Perry movie every 6.7 months. Counting his latest, Madea's Witness Protection, eight of them have starred his popular title character.

There's no question that Perry has built himself a small empire. But is that empire growing, shrinking or maintaining?

Turns out his most profitable film is his first: Diary of a Mad Black Woman. After six years of successful stints in Perry's stage plays, be brought the Madea character to the big screen for the first time, and she opened with a bang. Diary made $21.9 million in its opening weekend in February 2005 and instantly garnered strong buzz among Perry's fan base—and gained the industry's attention. Closing out with a $50.7 million total gross, the film made 2.8 times its modest $18 million combined budget.

2009's Madea Goes to Jail holds the #2 spot on the Perry countdown. During a one of the busiest first quarter box office markets on record that year, his sixth film wielded a huge marketing campaign and capitalized the growing curiosity of mainstream audiences. Madea Goes to Jail exploded with a $41 million debut on its way total $90.5 million in all. It is by far Perry's highest grossing film to-date (by over $27 million) and made 2.6 times more than its $35 million price tag.

Perry's second feature film effort, 2006's Madea's Family Reunion, is in fact his second highest-grosser as well as second-best opener.  That flick pulled $63.3 million on a $27 million cost—good enough to rank as his third most profitable film to-date.

Excluding 2008's The Family That Preys (which budget data is not currently available for) from our list, the majority of his films have turned respectable profits before even hitting the home video market. Only five flicks have failed to live up to par: 2007's Daddy's Little Girls (1.26x), 2011's Madea's Big Happy Family (1.26x), 2008's Meet the Browns (1.2x), this year's Good Deeds (1.09x), and 2010's For Colored Girls (0.9x). In fact, the latter movie stands as his least successful box office run up to this point—and low and behold, Madea is nowhere to be found in the film.

Is there a pattern?  Seemingly so. Perry's three most profitable films all feature Madea loud and proud—and only one of "her" films hasn't made back its money with ease. That makes it easy to understand why the actor-writer-director-producer has continued to adapt—and even shoehorn—Madea into more and more movies.  Conversely, three of his four least profitable films don't featureher in the title at all.

With Madea's Witness Protection looking to pull between $55 and $60 million by the end of its run, it should end up making approximately 1.5x its combined budget. That would make it his most successful venture since 2010, but still far behind the clear hits of his earlier Madea movies. And while diminishing returns inevitably set in on an over-exposed series and/or star, the rising budgets are just as responsible. Where Perry's first and most profitable film cost an average of $25.5 million, his most recent four have averaged close to $37.8 million.

Thanks to a devoted fan base and brilliantly targeted niche appeal, Perry continues to build his cash cow while simultaneously bringing out a (usually) consistent audience size. For as long as his fans continue to demand his products and give them life beyond the theatrical market, Perry's vilified reputation by film critics (who have granted only one of his films, I Can Do Bad All By Myself, a Fresh score on Rotten Tomatoes) circles is completely moot. He knows his audience, he knows the business, he's well-liked, and he's one of the most consistent producers working today. Other genres could use a Tyler Perry-type of their own.

The only problem is, looking at Tyler Perry's recent dramas like For Colored Girls and the underrated Good Deeds, he seems to be increasingly looking to take off Madea's wig for good and be taken seriously as a mainstream director. But with only Madea proving to be a reliable hitmaker, will audiences let him?

Budget data for The Family That Preys was not available at the time of the writing of this article.

Please note: "Combined budget" refers to the sum of the production budget and estimated cost of prints and advertising.  All references to budgets include both of these figures unless otherwise noted.  In addition, all "gross" figures -- unless otherwise stated -- refer to worldwide theatrical box office revenue.