close
FEATURE: Turns out saying %@#& isn't all it's cracked up to be

Seth MacFarlane on maturity, teddy bear fights, and finally getting to say whatever the %@#& he wants 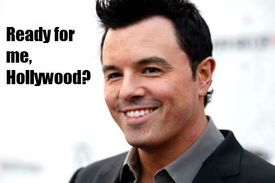 Behold: It's Seth MacFarlane's first movie. Ted—a raunchy, funny and ever-so-slightly sweet comedy about Mark Wahlberg and his talking teddy bear—hits theaters this week and after ten seasons of making Family Guy play it (semi) family-friendly on network TV, MacFarlane finally gets to go full R. And, as he admits, having full freedom was harder than he expected.

WHY HE TOOK SO LONG TO MAKE A MOVIE: Family Guy had that little cancellation thing happen to it, and I wanted to make sure that it was fully on its feet before I stepped away to do a film because it did mean stepping away from the show completely for at least a year, and that was something that I hadn't done yet. This was an idea that had actually been floating around in my head for a while. I had originally conceived it as an animated series idea and, for a number of reasons, shelved it. And then when it came time to do my first movie, it seemed like a story that would make a much better film than a series.

GOING R-RATED: The restrictions imposed by the FCC are self-imposed. In a way, that did make the movie harder. Here, you actually have to think about it, as opposed to just taking for granted that you're not going to be able to do this. Most of it was language. This movie's been labeled hard R, but I don't think of it as a hard R movie. It's a fairly moderately R movie. There's no graphic sex and there's no heavy drug use. It's R for language. So, if that doesn't bother you, you're fine. The first cut of this movie had a lot more uses of the word "fuck," and we did cut that down somewhat because we found that, even though it's an R-rated comedy and you can do whatever you want, it was starting to eat into the sweetness of the story a little bit. So, you do have to impose restraints on yourself, and it is more difficult than just being told by someone that you can't do something.

MATURITY: Adults acting like children and children acting like adults is generally a pretty reliable comic device. On Family Guy, you have Stewie, who is a baby that acts like an adult, and Peter, who's a man that acts like a child. This movie is a bit more textured and has a lot more shades to it, but in terms of the dynamic, we're essentially playing the teddy bear as the physical manifestation—in a symbolic or literal way—of John's [Walhberg] inability to grow up and get on with his life.

MAKING MARK WAHLBERG FIGHT A BEAR: The whole joke of it was that we wanted to play it as realistically as possible. We wanted it to feel like a fist fight in The Bourne Identity, except one of the characters happens to be a teddy bear. I think we pulled that off. Mark just sold it 150%. Even without the bear in there, when you look at that raw footage with the sound effects and him getting the s--t kicked out of him by this invisible adversary, it actually still kind of works. Hopefully, we made it painfully realistic.

HIS SURPRISINGLY SAFE TASTE IN MUSIC: I'm a film score junkie. I'm the world's biggest John Williams fan. I wanted this movie to have a classic film score because I felt like what it would do was play against the edginess of the comedy and earn you some of the harder jokes. You have to have that to balance things out. With Family Guy, for years that's what we've done. We've got these hard-edged jokes, but we have a pretty serious musical style. I think it works in tandem with each other.

MAKING SURE HIS JOKES AREN'T TOO OFFENSIVE: If you're going to make fun of one group, you've gotta make fun of them all. The cliche is "equal opportunity offender." In this movie, pretty much every religion, race and creed is poked fun at. As far as something going across the line, the systems that are in place as far as the screenings and audience testing make it pretty clear what's over the line and what's not. If something gets a gasp, eight times in a row, at eight screenings, you know it's probably got to go. There's been a couple of those jokes. Even on Family Guy, we do screenings of each episode before it goes to full animation and our own staff is not shy about going, "No, no, no, that's way over the line!" If you're getting enough laughs on the way there, it's probably okay. If even your friends are telling you that it's offensive, then they're probably right.

GOING ULTRA-BOSTON: To me, one of the reasons that Ghostbusters worked was that you had this ridiculous fantastical element to the story, but it was set against not just a realistic city, but a city we all know. There were ghosts running around and these exterminators who had to eliminate them, but the New York is very familiar and very real, with all of its warts. It grounded everything and earned you the rest of the stuff. That was kind of what I wanted this movie to feel like. You have a talking bear, so the rest of the movie should be as real and grounded as possible to earn that. One of the things that you can accomplish that with is by setting it in an actual city with an actual regional flavor.

HIS ANIMATION PHILOSOPHY: I wanted to keep the bear's design very simple. There's a style of 2D animation that The Simpsons employs and that Family Guy employs: when Homer Simpson is being addressed and he's just sitting there listening, it's just a blank, wide-eyed stare. There's something 100 times funnier about that than if there were a series of Disney-esque, subtle reactions. Each audience member can imprint what they think is going on inside his head based on their own bulls--t, and I wanted to do the same thing with Ted. Oftentimes, CG characters are so humanlike that they come off kind of creepy looking.

LIKE WHO?: Have you ever seen Jack Frost, that movie with Michael Keaton with that terrifying snowman that just gave you nightmares? That would be an example of CG gone wrong—and they all acknowledged it after that movie.

SUPERMAN VS. FLASH GORDON: I don't hate Brandon Routh. The jokes about him at the end of the movie are probably the closest things to what people may expect from me because of shows like Family Guy. It's a satirical jab. I'm sure he's a very, very nice guy. The Flash Gordon idea was just because it's a cult movie that a lot of people know. It's ridiculous and absurd, and it seemed like a funny piece of pop culture for John and Ted to bond over. It was something that worked as their movie that was the symbol of their friendship. We just looked up Sam Jones [the original Flash Gordon, now a bodyguard] and asked if he wanted to come do it, and he was very enthusiastic.