close
We take an early look at next summer's growing line-up of blockbuster hopefuls. Can any of them avoid franchise fatigue?

2014 Early Domestic Preview: Will 'Spider-Man', 'Transformers', or 'X-Men' Lead the Summer of Tentpole Franchises Without Momentum? 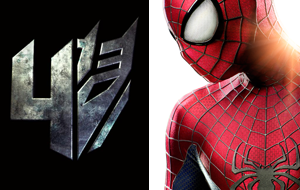 Summer is halfway over for movie fans. May generated several box office records and June delivered some big hits in the middle of the month. This season has certainly proven top-heavy, though, with May's string of blockbusters overshadowing any other weeks-long time frame on the calendar. It's a hard standard to live up to.

Among enthusiasts, all of this begs the question: what's in store for *next* summer?

The answer is a mixed bag. No summer 2014 releases have debuted trailers as most are still in production. Quality is ultimately king, but built-in interest is key for the success of big-budget franchise movies. The problem is this: after a few summers with stand-out event films far in advance of their release, 2014 seems lacking. For the first time since 2006, there will be no Avengers, Dark Knight, Harry Potter, or Iron Man.

Hindsight is 20/20 but, generally speaking, every year boasts one or more movies widely perceived as "the" film(s) to beat--and it's proven true when they finish among the top two grossers of the summer. 2008 had The Dark Knight and the fourth Indiana Jones. 2009 had the sequel to Transformers and the delayed sixth entry of Harry Potter. The years after were led by aforementioned series. 2014 just doesn't seem to have franchises going in with comparable momentum.

To be fair, next summer does have some high profile franchises on the slate. But are any of them still in their prime?

The Amazing Spider-Man #2 will open May for the third time in franchise history. 2012's reboot made headway into reviving the brand, and kids are still a huge factor in Spidey's lucrative potential, but this will be a sequel lacking the deafening buzz that preceded Sam Raimi's 2004 and 2007 sequels. The Amazing Spider-Man declined 22 percent from Spider-Man 3's non-inflation-adjusted domestic gross, and while the film has its fair share of fans, there are still a lot of audiences not won over by the grittier iteration of Peter Parker. (It'll still make bank globally, though.)

Two weeks after the webslinger, director Gareth Edwards' vision of Godzilla will drop. Little is known about his remake of the property, but the last blockbuster-would-be version of the famous monster was 1998's version from Roland Emmerich (hot off Independence Day at the time)--and it flopped. This summer's Pacific Rim could also have significant influence on how Godzilla performs next summer if Warner Bros. isn't careful. Opening in between two major comic book properties won't do it any favors, but, overseas appeal could be strong.

June brings two more franchises with questionable futures and/or pasts. The first is producer Michael Bay's Teenage Mutant Ninja Turtles, a series that could be due for rebirth with two decades having now passed since its zenith in popularity. Still, not every retro brand is destined to relaunch at event status. Nostalgic box office trips haven't fared well on average, today's kiddie audience isn't as familiar with the mythos, and this new Turtles is sandwiched between Pixar and DreamWorks movies. Bay and company have their work cut out for them.

The second June franchise is *director* Michael Bay's Transformers 4. Yes, the third film was a massive success despite declining 12 percent from its predecessor's domestic box office and more than 20 percent in terms of actual ticket sales. Dark of the Moon righted many wrongs of Revenge of the Fallen in the eyes of some viewers, but it goes without saying that the franchise is at an important crossroads.

A fair comparison: the Pirates of the Caribbean series saw box office and audience fatigue set in with its fourth entry, and given the similar history of the two franchises, Transformers is a candidate for a similar pattern. Changing up the cast is a bold move, one that could have a negative impact as general audiences lose that anchor of familiarity. Although, leading man Mark Wahlberg's ability to draw could offset some of that. Kids will still flock to it.

Then, there are the wild cards:

DreamWorks' How to Train Your Dragon 2 will be coming off a beloved first film. That should ordinarily be a strong advantage, but this sequel will be more than four years removed from its very well-received predecessor. Some say that's too long, but the right movie could nullify any disadvantage. The history of animated sequels at the box office has been mixed in recent years, but this one's future isn't written yet by any means.

Dawn of the Planet of the Apes has moderate momentum thanks to the surprise success of 2010's Rise, but this sequel will also have to overcome a cast change. Dawn could prove to be strong counter-programming for older audiences as it opens one week after Fast & Furious 7.

Marvel's Guardians of the Galaxy will then open August 1, 2014. It's very hard to bet against Marvel Studios right now, but this will be their most esoteric adaptation to-date. Serving as the precursor to 2015's The Avengers 2 may give it some default brownie points. Still, Guardians is the epitome of a wild card. Box office returns will depend on the studio's ability to make that corner of the Marvel Cinematic Universe palatable for general audiences. The August opening also means having to miss out on the heart of summer weekdays at the box office.

21 Jump Street 2 deserves mention here as its summer release follows the springtime success of 2012's first entry. While not necessarily a major franchise tentpole (yet), it's no wild card either. Given the popularity of Channing Tatum, Jonah Hill, and the first movie in general, this one has a healthy outlook.

What, then, are next summer's "banner" releases?

For the first time in nearly a decade for its series, the front-runner seems to be X-Men: Days of Future Past. Online buzz for the film has been audible as it promises to unite the original cast with their well-regarded, younger counterparts from 2011's First Class. Yes, the X-Men franchise slipped from its box office peak after 2006, but as The Avengers proved, sometimes the whole is greater than the sum of its parts.

Days of Future Past will feature a large ensemble led by Hugh Jackman, Jennifer Lawrence, Michael Fassbender, and James McAvoy (among many others) with Bryan Singer returning to direct the mutants for the first time since 2003's X2. The recent move to a Memorial Day weekend opening--just three weeks after Spidey--indicates that Fox has a lot of confidence in it. The sequel has consistently been one of the most discussed movies on Twitter.

The film that X-Men moved away from in July is none other than Fast & Furious 7. Slated to open July 11, 2014, the seventh entry will be fresh off the success of Fast 6, which has just become the most successful film in the franchise. With the cast returning and a new villain arc led by Jason Statham, audiences are already excited for this one. How high can the Fast franchise go?

Summer 2014 also has other promising titles in the queue. Pixar's The Good Dinosaur, Seth MacFarlane's A Million Ways to Die in the West, Tom Cruise's All You Need Is Kill, Disney's Maleficent, Dwayne Johnson's Hercules, and the Wachowskis' Jupiter Ascending have all hit the radar.

But, just a few years ago, a summer featuring Spider-Man and Transformers movies would have seen either of those carrying the summer franchise torch with unmistakable forward momentum (and they did). For now, next summer looks more unclear, and in fact, could belong to the mutants and the racers again. Either way, next summer's box office likely won't start out at the same pace as 2013's without some significant release date changes between now and then. On the bright side, the lack of momentum from these franchises means a better chance for newer properties to break out.

What do you think next summer's biggest hits will be? Let us know below.

Discuss this article on the BoxOffice Forums

Tags: The Amazing Spider-Man 2, Transformers 4, The Good Dinosaur, Fast & Furious 7, Godzilla, X-Men: Days of Future Past, Dawn of the Planet of the Apes, 21 Jump Street 2, Teenage Mutant Ninja Turtles, Guardians of the Galaxy, How to Train Your Dragon 2
Print