Inception and The Sorcerer's Apprentice will try to do some damage at the box office this July. 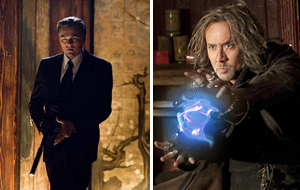 This week, we've added Inception and The Sorcerer's Apprentice to the BOXOFFICE Forecast. Both films are set to hit theaters on July 16.

After the huge success of The Dark Knight, Christopher Nolan has taken on a passion project that appears to be a real mind-bender. Warner Bros. gave the director carte blanche, and based on the incredibly effective trailers for Inception it doesn't look like he's wasted that privilege.

The main question is whether or not audiences who are used to being spoon fed plot details in trailers will be enticed by a marketing campaign that reveals very little.

Leonardo DiCaprio will bring a solid following with him, and Warner Bros. is understandably pushing the "from the director of The Dark Knight" tagline pretty hard. It'll be interesting to see how this one performs.

Star Jay Baruchel seems to be everywhere this year. He's starred in raunchy comedies (She's Out of My League) and animated flicks for the family (How to Train Your Dragon) and now he'll try to help open a film during the summer. Of course, it doesn't hurt that he'll be aided by Nicolas Cage and Jerry Bruckheimer. Disney is obviously hoping that Sorcerer's Apprentice will post National Treasure-style numbers, but the film looks to be slightly dark and brooding. It doesn't have that fun, adventurous air to it that helped National Treasure and National Treasure 2: Book of Secrets reach such a large audience.

Check out our predictions for Inception and The Sorcerer's Apprentice as well as other films in the table below.

Tags: Toy Story 3, The Twilight Saga: Eclipse, Inception, The A-Team, Prince of Persia: The Sands of Time, The Last Airbender, Knight and Day, Despicable Me, Grown Ups, The Karate Kid (2010), Marmaduke, The Sorcerer's Apprentice, Predators, Get Him to the Greek, Killers, Jonah Hex, Splice