Long Range Forecast: 'The Other Guys' and 'Step Up 3D'

The Other Guys and Step Up 3D will look to start August off right. 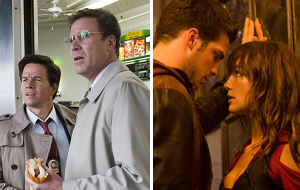 This week, we've added The Other Guys and Step Up 3D to our Long Range Forecast. Both films are scheduled to open on August 6.

As far as cop comedies go, The Other Guys should definitely perform much better than Cop Out, the Bruce Willis/Tracy Morgan flick that landed with a thud earlier this year. Stars Will Ferrell and Mark Wahlberg seem to have a great dynamic going, and it also doesn't hurt that Samuel L. Jackson and Dwayne Johnson are in the cast. Look for Ferrell to rebound a bit after the disappointing performance of Land of the Lost last summer.

The Step Up franchise is a decent earner, and it should have more than enough steam left in it for the third installment to post solid numbers. The 3D angle will also help keep fans coming back.

Check out our predictions for those two films as well as others in the table below.

Tags: The Other Guys, Step Up 3D, Toy Story 3, The Twilight Saga: Eclipse, Inception, The A-Team, The Last Airbender, Knight and Day, Salt, The Karate Kid, Despicable Me, Grown Ups