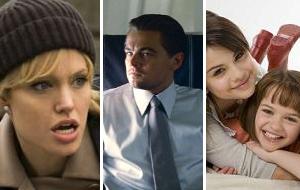 Wednesday Update: With Inception turning into one of the most intensely debated films of the last several years, it's looking likely that the Warner Bros. release will easily fend off Salt and Ramona and Beezus in order to spend another weekend at #1.

Inception is the kind of film that practically forces viewers to discuss it for hours after leaving the theater and therefore it has quickly lived up to its reputation as the must-see film of the summer. After a strong debut, the Warner Bros. release delivered solid grosses on Monday and Tuesday. Inception will not fade away quickly like most summer blockbusters. Christopher Nolan's mind-bender is going to have legs.

According to the most recent WebWatch report, Inception holds a dominant 39.89% market share of online opinions among released films. The closest film to it is The Twilight Saga: Eclipse with 13.02%.

Inception's most active Facebook has been adding thousands of new fans each day. On Twitter, conversations about the film continue to flourish, giving Inception a market share consistently above 50%.

Word-of-mouth is incredibly strong for Inception, which is a reassuring sign for a film that many felt would be too confusing and dense for mainstream audiences to digest. The sci-fi flick boasts a 93% approval rating from more than 238,000 Flixster users.

As of 3 p.m. PT, Fandango.com is reporting that Inception still dominates daily sales with 62%.

Look for Inception to pull in an impressive $41 million during its sophomore frame.

There's plenty of room at the box office for both Leonardo DiCaprio and Angelina Jolie. Salt promises the kind of action-packed set pieces that moviegoers crave during the summer. Critics are also responding very well to the spy thriller.

WebWatch data shows that Salt trails only Scott Pilgrim vs. the World when it comes to the market share of online opinions among unreleased films.

Facebook growth has been disappointing for Salt this week, but it does boast a healthy base. As for Twitter, the Sony release has been delivering unspectacular tweet volumes.

As of 3 p.m. PT, Fandango is reporting that Salt is responsible for a weak 6% of daily sales. That number should see a slight increase tomorrow.

Ramona and Beezus will have to settle for a modestly-sized audience since it's opening in the shadow of two blockbusters. The PG-rated flick will make a perfect choice for mother/daughter moviegoing combos.

The 20th Century Fox release has yet to make a dent in online sales.

Expect Ramona and Beezus to debut with $8 million from 2,700 locations.

Check out our top 10 predictions in the table below.