Weekend Predictions: 'Thor,' 'Jumping the Broom' and 'Something Borrowed' 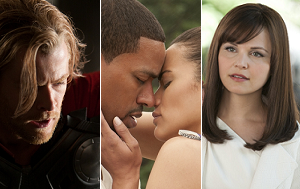 Wednesday Afternoon Update: Thor will have a major impact at the box office this weekend while two new romantic comedies face off in its shadow.

The summer movie season is truly upon us. Fast Five kicked things off with a bang last weekend, now Thor will lead what's bound to be another strong frame. The last three years have seen some very successful launches during this period: Iron Man, X-Men Origins: Wolverine and Iron Man 2—making the first full weekend of May one the best times to open a film. Thor will surely capitalize, but expectations are not as high as they were for the Iron Man films and Wolverine. Star Chris Hemsworth isn't nearly as recognizable as Iron Man's Robert Downey Jr., and Thor as a character is not as wildly popular as Wolverine.

Thor is doing quite well on both Facebook and Twitter. The action flick's most active Facebook page has tacked on nearly 60,000 new likes since early Monday morning—an incredibly impressive increase. On Twitter, Thor is easily outpacing Clash of the Titans, but it still ranks behind Iron Man 2 and Fast Five.

As of 5 p.m. PT, Fandango.com reports that Thor is responsible for a whopping 45% of daily sales. That's a strong number considering that Fast Five is having a very healthy week.

Look for Thor to take in $68 million from around 3,500 locations from its domestic debut.

While a drop of at least 50% is almost unavoidable, Fast Five should hold up relatively well during its sophomore frame. The buzz surrounding the sequel is incredibly strong. The franchise's most active Facebook page has added nearly 225,000 new likes since last Friday—a staggering figure for a page that already had a base well above 5 million. Nearly 53,000 Flixster users have combined to give the film a glowing 90% approval rating.

Fandango reports that Fast Five leads with 16% of daily sales.

Fast Five should manage $38 million even with Thor causing a lot of noise.

Jumping the Broom and Something Borrowed are both aimed largely at female moviegoers who won't be enticed by typical summer fare. There will be a lot of audience overlap between the two, and they'll both suffer a bit as a result. Based on online signs, we're betting that Jumping the Broom will win the battle.

Fandango is reporting that Something Borrowed has managed 7% of daily sales, while Jumping the Broom has yet to crack the top 5 sellers list. Those figures could change drastically tomorrow as more moviegoers plan for the weekend.

Expect Jumping the Broom to take in $10.5 million from close to 1,900 locations, while Something Borrowed looks poised for $10 million from around 2,900 engagements.

Check out our top 10 predictions in the table below.