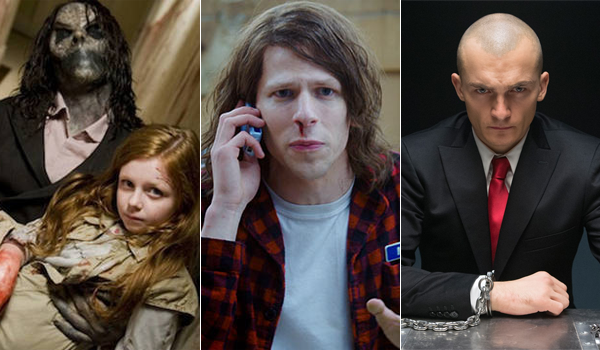 Three new wide releases hit theaters this weekend, but will any of them be able to unseat Straight Outta Compton from the top spot?

- The original film was a solid mid-level horror hit in October 2012, earning $48 million domestically.
- With little in the way of horror breakouts so far in 2015, fans of the genre could turn out for this sequel.
- Lifetime Flixster votes are ahead of Insidious Chapter 3 and Annabelle.

- It's questionable whether or not the original had enough fans to warrant high box office expectations for a sequel.
- Competition from Straight Outta Compton's holding power will be a factor.
- In general, social media activity is very modest with recent growth trending behind comparable titles on Facebook, Flixster, and Twitter.

- Jesse Eisenberg and Kristen Stewart give the stoner comedy some name/face recognition for young adult fans.
- Twitter and Facebook activity have steadily picked up in recent weeks.

- With just over 7,600 Flixster votes and 112,000 Facebook fans, buzz is certifiably minimal.
- Reviews are heading south ahead of release, which will narrow its already limited target audience.

- Flixster and Facebook activity are fairly solid.
- Boasting Zachary Quinto as a supporting actor can't hurt given his genre popularity through Star Trek and Heroes.

- The first film was a $40 million domestic dud back in 2007. Is there really anyone clamoring to see a sequel?
- Twitter buzz leaves much to be desired.

BoxOffice projects this weekend's top ten will score close to $97.8 million. That would mark less than a 1 percent improvement from the same frame last year which tallied $97.2 million and saw Guardians of the Galaxy and Teenage Mutant Ninja Turtles again lead the top two spots ahead of three newcomers.

Check out our complete weekend forecast in the table below.