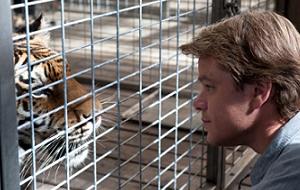 20th Century Fox decided to show sneak previews of We Bought a Zoo this past weekend at approximately 800 locations in order to help it stand out among the rush of Christmas releases. The question is: Did they work?

"They worked out as well as we could have hoped for," Chris Aronson, Fox's senior vice president of distribution tells Boxoffice. "We had sellouts in markets from New York to LA, Minneapolis to Memphis, Salt Lake City to Boston, Detroit to Orlando, Philly to Kansas City. Reactions were fantastic/through the roof with laughter and tears being commonplace with the multi-generational audience, both family and non-family alike"

We Bought a Zoo had a solid weekend on Twitter. Cameron Crowe's latest inspired 3,067 tweets from Friday to Sunday, 2,084 of which happened on Sunday. The positive:negative ratio for the tweets came in at an average of 5:1 for all three days—a respectable response.

Facebook activity leaves something to be desired. The drama's official page added only 2,251 new likes over the weekend for a total of 5,338 as of Sunday night. Fox is wisely posting fan reviews from tout.com on Facebook in order to inspire people to send their friends to the page.

Even if the online buzz isn't exactly overwhelming for We Bought a Zoo, Fox's decision surely gives the film a much-needed advantage over the competition. Opening on December 23 means that Zoo will have to compete with three other family-skewing flicks: Alvin and the Chipmunks: Chipwrecked (due on 12.16 from Fox), The Adventures of Tintin (due on 12.21) and War Horse (due on 12.25). A crowded multiplex often means that at least one film will disappoint—the sneak may help Zoo avoid becoming that film.

"Sneaks continue to work as a great way to provide word of mouth recommendations and awareness," says Jeremy Devine, director of marketing for Rave Motion Pictures. "With everyone being barraged by advertising, one on one feedback amongst friends is an impactful seller."