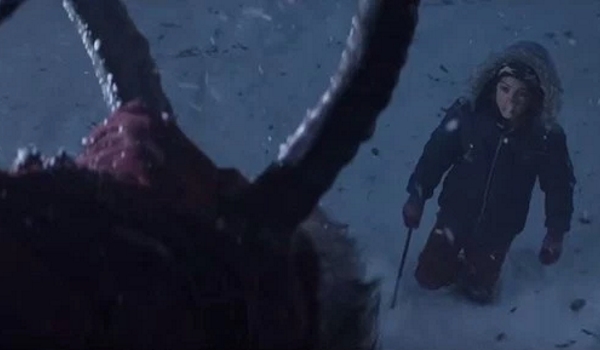 Monday Morning Update: After The Visit took charge last week, this week another horror led all Facebook like increases in Krampus. The horror-comedy rose a sharp 113k new likes over the past week, almost a 300% increase. The film was largely unknown until its teaser dropped last week and many horror faithfuls clearly ate it up quickly. Its still very low in overall tweets (150,858), but with 10 weeks till release it is well poised to develop a social media following to bolster its receipts. The film is based on the folklore of many European cultures which feature a horned, hooved demon who is essentially the anti-Santa. Most North Americans not of European descent will be unaware of the character but the spooky trailer promises that it will be a pretty unique offering during this year's holiday season which could see it be a surprise success.

Director Michael Dougherty is best known for his work as a writer and collaborator with Bryan Singer on large scale comic-book films such as X2, Superman Returns and the upcoming X-Men: Apocalypse but his sole past feature film directorial credits are in the horror genre with the cult hit Trick r' Treat. Though the film never saw a theatrical release it gained many fans in critics and horror faithful on its DVD release and has been given a place in more than one prominent best of horror movie lists. Needless to say Krampus is highly anticipated with horror faithfuls and critics alike.

The rest of the top 5 movers are made up with high anticipated September releases with the lone exception of Deadpool since he it still very much the talk of the town for many movie enthusiasts. The biggest surprise of the rest of the list would have to be The Intern making it into the fray. With an appeal to an older crowd I had not expected it to make any appearances near the top of either of our social media lists but yet here it is. Anne Hathaway no doubt can help bridge the gap between younger and older audiences and perhaps Nancy Meyers' first film in 6 years (the longest gap in her career) has people excited. Whatever the reason I'm amping up my expectations for its potential accordingly.