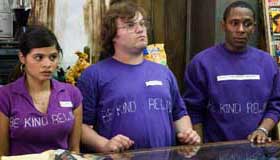 As Mike (Mos Def)—the earnest number-one son at a mom-and-pop video store—desperately tries to determine why all his VHS tapes are suddenly blank, he notices that whenever his best buddy Jerry (Jack Black) approaches the TV, waves of static cascade across the screen.

“You’re magnetized!” Mike wails, realizing that allowing Jerry into the shop—something that its owner, Mr. Fletcher (Danny Glover) had forbidden when he went out of town—may have ensured that his embattled video store will finally go the way of  well, VHS tapes.

Crackling as it is with the electric creativity of Michel Gondry, this cute comedy is a magnetic movie that will likely attract the arthouse audiences that adored the Academy Award-winning writer/director’s earlier efforts The Science of Sleep and The Eternal Sunshine of the Spotless Mind. And, as with the casting of Jim Carrey in the leading role in the latter, the presence of a certified comedic star—in this case, Black—seems sure to increase its drawing power at the domestic box office.

To make things right, Jerry and Mike set out to replace all the erased tapes by remaking all the demagnetized movies, including Boyz N The Hood, Driving Miss Daisy, Ghostbusters, RoboCop and 2001: A Space Odyssey. (They also slap together a short spoof of King Kong, an ironic cinematic choice for Black, who starred in Peter Jackson’s blockbuster remake of that 1939 cult classic.) Although their quirky remakes quickly attract a local cult following, Mike and Jerry run into legal trouble faster than you can say, “FBI Warning,” leading to comic complications.

With their whimsical silliness and Jerry-rigged junkyard sets and props, the remade movies—which Mike and Jerry insist on referring to, in one of the script’s few clunkers, as being “Sweded” after a halfhearted attempt to pass them off as rare imports from Sweden—are the best parts of Be Kind Rewind, celebrations of the hilarious homemade aesthetic that has made Gondry’s music videos for artists such as the White Stripes into hits. Their cartoonish charm is more than enough to overcome the movie’s shortcomings, such as a strangely repellant performance from Mos Def, an otherwise accomplished actor whose Mike comes across as a bit of a mumble-mouthed dolt.